June 14, 2021 – New York – The two largest Jewish communities in the world are significantly lacking in education about each other, concludes new American Jewish Committee (AJC) surveys of Israeli and U.S. Jews. The parallel studies, probing how Jews in the U.S. and Israel learn about each other and interact, were conducted by SSRS in the U.S. and Geocartography in Israel, leading polling firms that have carried out AJC surveys for years.

“These surveys provide a wealth of critical information about the state of Israel-Diaspora relations, and make the case for increased commitment in each community to high-quality education about, and interpersonal engagement with, the other,” said Laura Shaw Frank, AJC Director of Contemporary Jewish Life.

Both surveys show that despite striking deficiencies in knowledge, shared affinity is strong. 60% of American Jews say that being connected to Israel is important to their Jewish identity, and 75% of Israeli Jews see a thriving Diaspora as vital to the long-term future of the Jewish people.

American Jews are divided on the strength of the formal Jewish education they received about Israel from kindergarten through 12th grade: 37% described it as strong, 21% as medium, 22% as weak, and 18% said it was non-existent. Orthodox Jews were more likely than others to have gained a strong education. 60% of Orthodox Jews, compared to 53% of Conservative Jews, 40% of Reform Jews, and 16% of secular Jews reported their Israel education as strong.

For many American Jews, learning about Israel continues after high school: 50% of those who attended college say they participated in courses, events, or trips where they learned more about Israel. For those under the age of 40, that number jumps to 67%. Seven-in-ten of those who received their Jewish education in multiple locations growing up sought out Israel-related activities during college, as opposed to only 45% of those who obtained their education in just one or two places.

Familiarity with the Hebrew language varies among American Jews:

Education in Israel about Diaspora Jewry is far less common than learning about Israel in America: 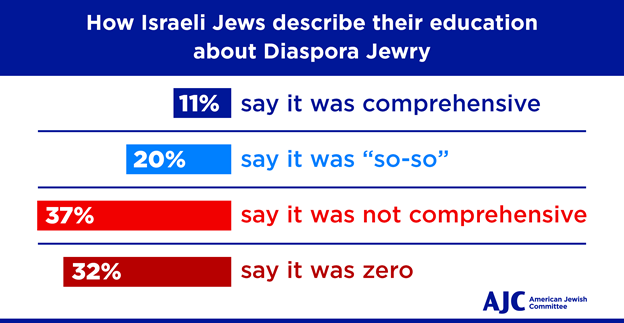 Only 16% of Americans and 13% of Israelis correctly answered all basic knowledge questions about the other community (4 in the American survey and 3 in the Israeli survey).

Though U.S. and Israeli Jews comprise more than 90% of the world Jewish population today, only 39% of U.S. Jews know the percentage of world Jewry in Israel, and 51% of Israelis correctly answered the percentage in America.

60% of American Jews say being connected to Israel is important to their Jewish identity, while 21% say it is not too important and 19% not at all important. However, the number who say it is important to their Jewish identity drops to 46% among those ages 18-39. Jews who affiliate with one of the denominations of American Judaism report in high percentages – 84% of Orthodox Jews, 87% of Conservative Jews, and 64% of Reform Jews, compared to 34% of secular Jews.

The 75% of Israelis who say a thriving Diaspora is vital for the long-term future of the Jewish people provided a variety of reasons:

Those saying a thriving Diaspora is not vital explained their reasons:

Only 45% of U.S. Jews have visited Israel. For those who did not visit, 24% said it was lack of interest, 25% lack of opportunity, 27% lack of funds, and 9% said they are concerned about safety or security. Among those who visited Israel, 73% say their visit(s) strengthened their connection to Israel, while only 6% said it was weakened. 20% say their visit(s) made no impact on their connection to Israel.

Of the 47% of Israelis who have visited the U.S., 70% said their visit(s) had no impact on their connection to American Jews, 25% said it was strengthened, and 6% said it was weakened.

The full survey can be viewed at  https://ajc.org/survey2021. 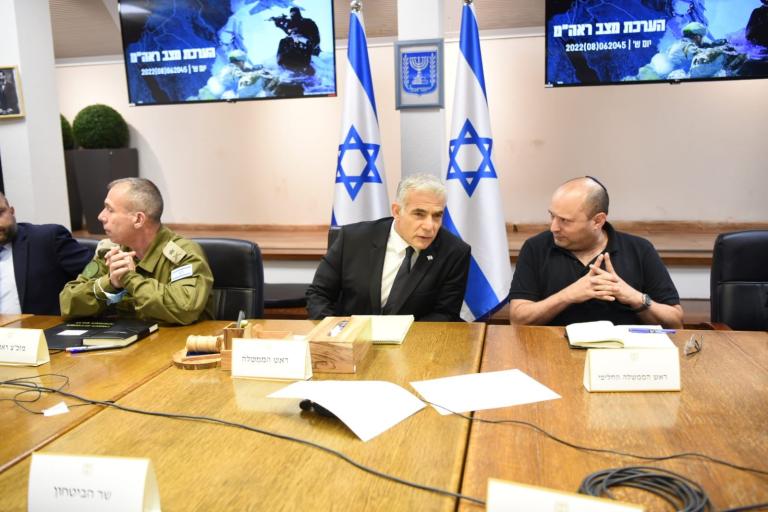