AJC’s Governors United Against BDS initiative has gotten the governors of all 50 U.S. states and the mayor of D.C. to condemn the boycott, divestment, and sanctions (BDS) movement, and to affirm that Israel remains a vital U.S. ally and economic partner. BDS makes a two-state solution more difficult by demonizing, delegitimizing and isolating Israel – a robust, pluralistic democracy that has extensive commercial ties with the U.S.

Republican and Democratic governors from coast to coast are now united in supporting Israel and publicly rejecting the anti-Israel boycott, divestment, and sanctions (BDS) campaign. To view the full Governors United Against BDS statement, click here. This is a big win for Jewish advocacy and Israel – and a huge blow to those calling for a boycott of the Jewish state. 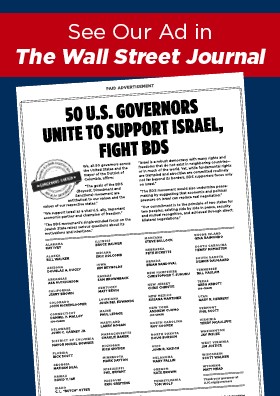 ‡The Mayor of the District of Columbia is the head of the executive branch of the government of Washington, D.C.