Together, millions of people around the world sent a powerful message that hate will not prevail. 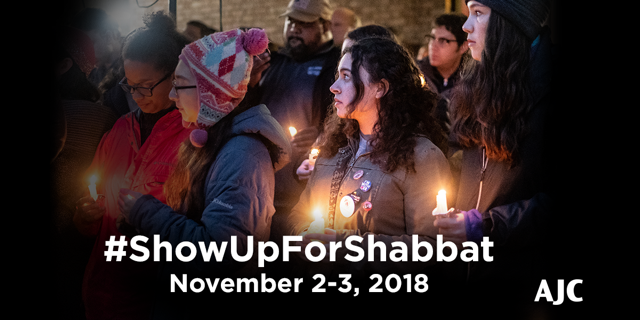 On Saturday, October 28, 2018, a gunman entered the Tree of Life building in Pittsburgh, murdering eleven Jews at prayer in the worst antisemitic attack in American history.

As the scale of the carnage became known, and while Jews across America were still in a state of shock, AJC drew up a plan to galvanize Jewish communities and their allies in an expression of unity and defiance.

Dubbed #ShowUpForShabbat, the social media-based campaign called on both Jews and those of other faiths—along with elected officials, religious and civic leaders, diplomats, celebrities, and other communal allies—to flock to synagogues the coming Shabbat (Friday night and Saturday morning, November 2-3) in support of the Pittsburgh Jewish community and all of American Jewry.

#ShowUpForShabbat swiftly became the largest expression of solidarity with the Jewish community in American history.

Dozens of public figures used their Twitter, Facebook, and Instagram accounts to express their support for the #ShowUpForShabbat campaign and announce their intention to participate, including:

and dozens of elected officials from both parties.

Synagogues across the country reported massive crowds rivaling or exceeding those seen at High Holy Day services, with some holding services outdoors or in overflow spaces in order to accommodate the well-wishers. The outpouring of love and support offered American Jews a glimmer of light in the darkness of that terrible week, offering them and their allies hope. Together, millions of people around the world sent a powerful message that hate will not prevail.

This past weekend, we came together to #ShowUpForShabbat. This is what it looked like. Thank you all for making this campaign the largest expression of solidarity with the Jewish community in history. pic.twitter.com/NNlwoBmEZQ