As the largest Palestinian community outside the Middle East advances an aggressive anti-Israel agenda bordering on anti-Semitism, Chile is facing constant attacks on its democracy and its heritage of inclusiveness.

The country’s small but vibrant Jewish community feels increasingly unsafe as questions are raised about its support for Israel. The most recent in a long series of incidents was a boycott by pro-Palestinian groups of a Jewish candidate elected to the student council at the University of Chile. There have been numerous anti-Semitic provocations at sporting events and constant online harassment. Here are facts you should know:

1) Palestinian and BDS Extremism in Chile

The Boycott, Divestment, and Sanctions movement (BDS), an initiative that seeks to eliminate Israel as a Jewish state, is more solidly anchored in Chile than anywhere else in Latin America. The fact that there are 400,000 Chilean citizens of Palestinian descent whose numbers and economic, political, and media power are growing only begins to explain the ongoing problem.

For decades, Jewish and Palestinian immigrants coexisted peacefully side by side. Relatively recently, however, younger members of the local Palestinian Federation have begun to import the Middle East conflict to Chilean shores. Adopting a zero-sum attitude, they deny Jews the right to a national homeland and systematically harass—on college campuses, in Parliament, and in the media—the outnumbered Jewish community of some 20,000 members.

Radical anti-Israel Palestinian activists and their BDS supporters are active on social media. Basing themselves on a simplistic, black-and-white attitude, they promote hateful messages not only against Israel but also against Chile’s own Jewish community. The result is a toxic environment endangering the country’s democratic social fabric. On any given day in Chile’s public debate, it’s not uncommon to come across images such as the one below, which was originally posted on the website of the Palestinian Federation. 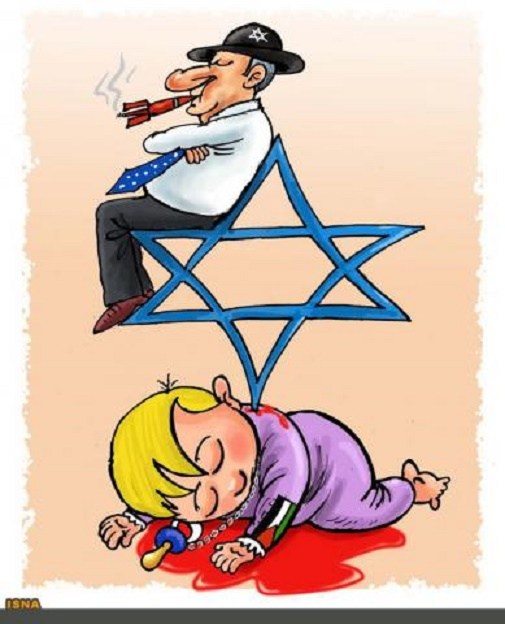 The idea that Jews and Israelis kill Palestinian children and thereby replicate the Holocaust is part of their recurring narrative, as expressed in this Facebook post. 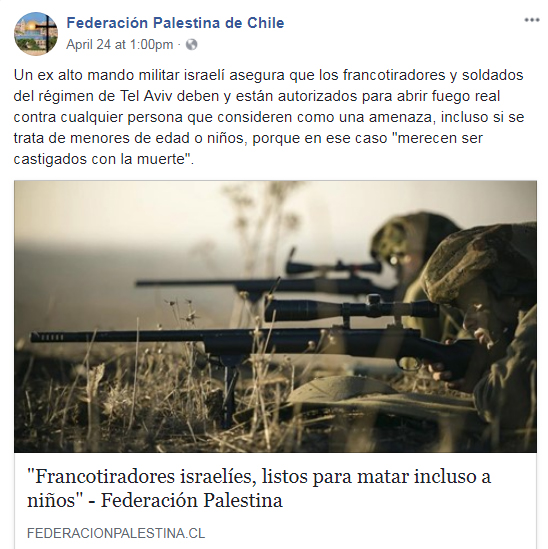 3) Violence at a Soccer Match

Not even sports are exempt from aggressive confrontation. During an amateur soccer match between Estadio Israelita Maccabi and Club Palestino at the latter’s home stadium, the referee, Norman Vega, had to suspend the game due to the uncontrolled violence that ensued when hundreds of Palestinian fans invaded the field.

In his official report, Vega recalled how the Palestinian hooligans “threw cigarettes and bottles of water, and yelled racist insults at Maccabi players throughout the entire match.” The referee himself was later attacked by a Club Palestino official, who came up from behind and punched him in the ribs.

The leaders of Chile’s Jewish community, together with several members of Congress, filed a legal complaint. The media initially reported the incident simply as “renewed tension between the two communities,” but three days later, the league’s disciplinary tribunal imposed severe punishments on Club Palestino, suspending it from the competition for the rest of the year. 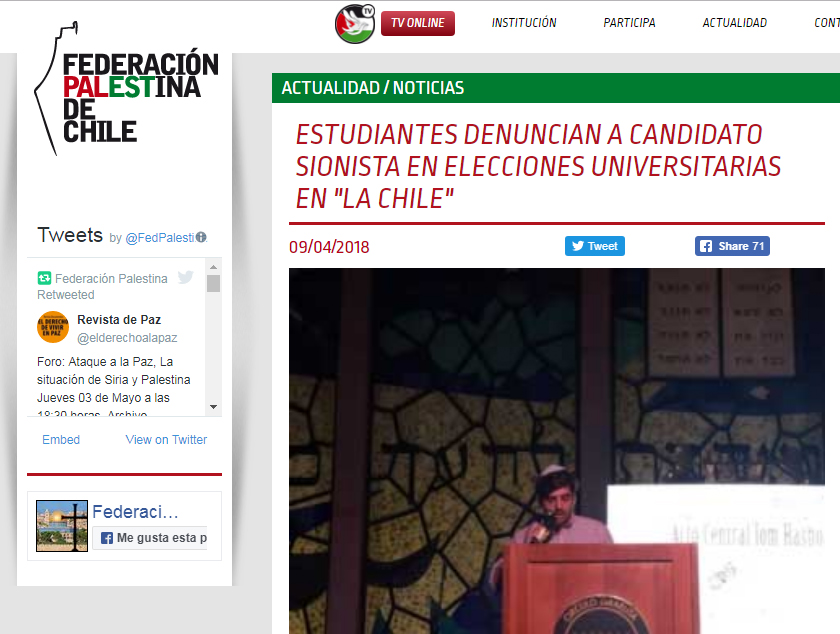 The General Union of Palestinian Students (UGEP) launched an ominous campaign to boycott the candidacy of Testa, who was part of the socialist “United We Can” list. In a statement, UGEP explained that Testa was unacceptable because he is Jewish and supports Israel. It is unprecedented in Chile for a citizen’s religious or ethnic identity and support for his ancestral homeland to be used as a litmus test to judge his competence for holding a public position.

Fortunately, the socialist group refused to back down. “We value Jorge’s commitment to activism and socialist principles,” read the rebuttal. “The capabilities of a candidate for an academic position should not be judged by his or her cultural or religious identity.

Testa was finally elected, receiving the vocal support of those who understand that in democratic Chile there is no room for this kind of discrimination and hatred. Nevertheless, the incident once again brought to the surface the dangers posed by intolerance and prejudice.

The Jewish community of Chile finds itself in rough waters. While previous and current governments have expressed their commitment to put an end to all forms of anti-Semitism and incitement, much more needs to be done.

After years of promises, last September, former President Michelle Bachelet finally introduced a bill to penalize racism, hatred, and incitement, but passage could take a long time. While supporting this legislation, AJC urges that a denunciation of anti-Semitism in all its forms should be clearly incorporated in the new law.

It’s unclear whether current President Sebastian Piñera will move this project forward. In the meantime, Chilean society, especially the media, is at fault for failing to identify the real cause of what it usually refers to as “tensions between Jews and Palestinians.” Jewish leaders warn against this hostility that corrodes the peaceful coexistence Chile has fought so hard to achieve, but their cry seems to have fallen on deaf ears.

Is fighting against anti-Semitism solely a Jewish issue? Is protecting the human rights of Chilean Jews solely their own responsibility? Modern history proves that anti-Semitism and democratic values don’t go together, and that when the first rises the second declines. Chile must choose. 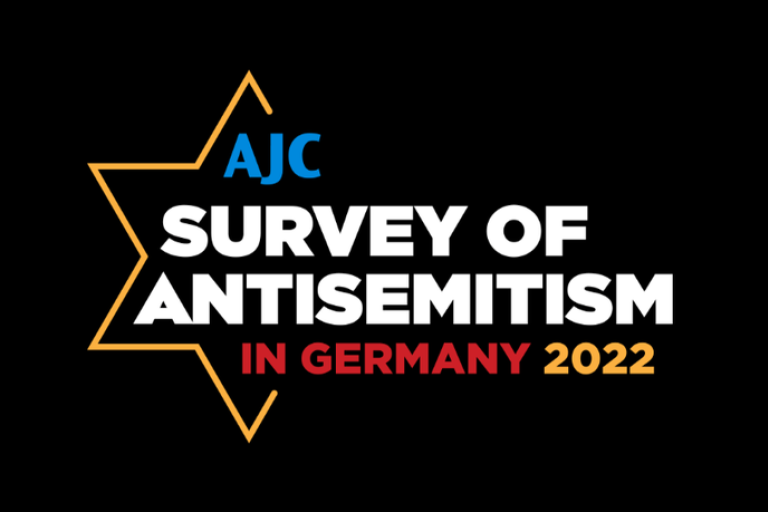