Tuesday turned out to be the most intense day yet of the program.

Leaving at 7:00 am, the group proceeded by helicopter to Mount Bental in the Golan Heights for a briefing with Brig. Gen. (res.) Nitzan Nuriel about the complex situation just across the northern border. Nitzan explained to the group how Iran was establishing a foothold in Syria, bringing Shiite militias from Pakistan, Afghanistan and other places to replace the ethnically-cleansed Sunni population and to thus cement the Iranian/Shiite bridge from Iran and across Syria all the way to Lebanon. It is a regional and global challenge the West can no longer ignore and needs to push back, he said.

From there, a mere 10-minute helicopter flight brought the delegation to Mount Adir on the Lebanese border. Clearly visible from the viewpoint were the Lebanese villages just across the border, “all controlled by Hezbollah, Hezbollah outposts, really,” as Nitzan said. With some 120,000 missiles pointed at Israel and hidden among the civilian population, in those same villages the participants could so clearly see in front of them, it is only a question of time when the next confrontation would start, Nitzan said. Given Hezbollah’s much more devastating firepower, the destruction on both sides would be so much more severe in the next confrontation than in previous wars. Europe could do its part in trying to prevent this next confrontation by taking a tougher line against the terror group.

The next stop was in Nein, an Arab Israeli village, where the group was hosted by Na’el Zoabi, a local elementary school principal. Together with other community leaders, the group broke bread in his home and listened to his commitments and those of his colleagues, who all spoke of coexistence between Arabs and Jews in Israel and their plans to establish a new party to run in the next Knesset elections, with the prime goal to strive for between relations between the communities. The participants were excited to see such civil engagement among elements of the Muslim community.

Landing back in Jerusalem, there was no time to rest as Col. (res.) Miri Eisen, former International Media Advisor to the Prime Minister, immediately took the group on a geopolitical tour of the city. From a viewpoint just below the UN compound, overlooking the Old City and the Mount of Olives, Miri talked about the significance of the Holy Basin and how the line that the international community sees as the “natural” or rather untouchable division between East and West Jerusalem, was in reality just an armistice line negotiated between Israeli and Egyptian officers.

Deeply impressed by the varied and dramatic experiences and interactions they experienced first-hand, one participant declared that he had “completely changed his opinion of Israel since he arrived.” 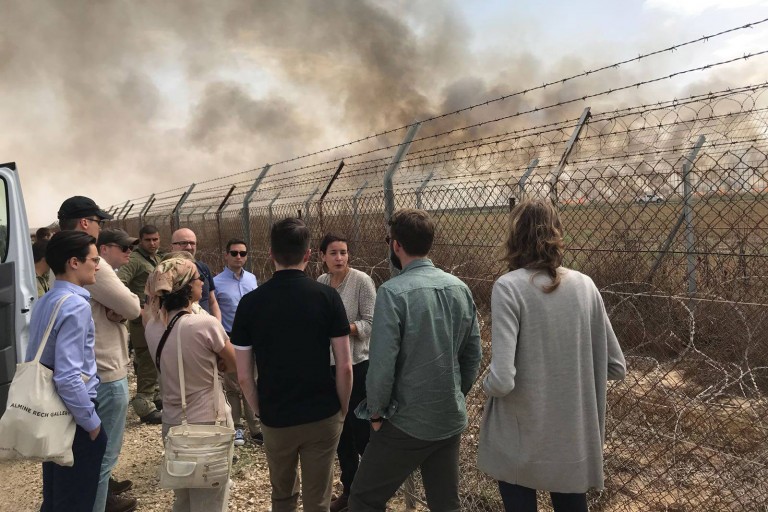