Translate the Hate: The Rise of Six Antisemitic Terms in 2020

As if we needed yet another reason to be glad 2020 is behind us, Jew haters gave us six more.

Amid the coronavirus pandemic, divisive election, and police brutality against Black Americans, antisemites found a half dozen new ways to blame the Jews for the nation’s woes.

The six antisemitic terms and tropes invented or given new life during the lockdown have been added to American Jewish Committee’s Translate Hate, a comprehensive index of antisemitic expressions aimed at sharpening media literacy on antisemitism and hate, especially in the digital realm.

Originally published in 2019, the AJC glossary explains the history and dark significance of 44 terms and tropes and why they are antisemitic when used in a certain context.

Holly Huffnagle, AJC’s U.S. Director for Combating Antisemitism, said the glossary is especially important for curbing the spread of antisemitism online, “where there are no gatekeepers or fact checkers and where lies spread on average six times faster than truth.”

“Millions of users can share antisemitic memes or phrases—often using coded language and implicit speech—to get around artificial intelligence filters and content moderators to reach an unprecedented number of people,” Huffnagle said. “Translate Hate will help you recognize antisemitism when you see it.”

Here are the six terms and phrases – some new, some old – that invoked antisemitism during the nationwide lockdown.

Early in the pandemic, the FBI warned authorities across the U.S. that racist groups were urging their devotees to contract the virus and seek out Jewish people to infect. Indeed, as news of COVID-19 spread in the U.S., the term “Holocough” emerged on white supremacist and neo-Nazi channels of alternative social media platforms. The rallying cry to infect and kill Jews with coronavirus even had a slogan: “If you have the bug, give a hug. Spread the flu to every Jew.”

Click here to read the entry for ‘Holocough’ in AJC’s Translate Hate glossary. 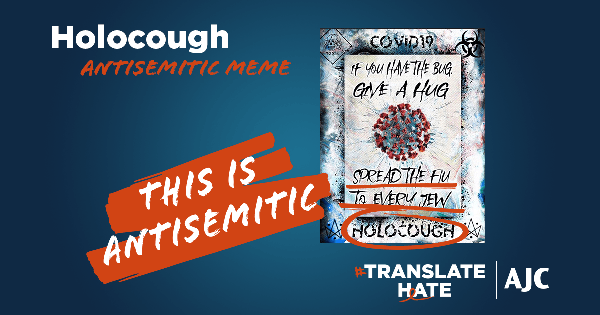 Plagues have never been a time for complacency among Jews. After the bubonic plague wiped out populations across Europe in the early 14th century, Jews were blamed for “poisoning the well,” or spreading the disease through common drinking wells. A similar smear tactic has been employed during the COVID-19 pandemic. Far-right fringe platforms have blamed Jews for purposefully spreading the virus, while some on the far-left said Israel or Zionists created COVID-19 to hurt the Palestinians or profit from the vaccine.

Click here to read the entry for ‘poisoning the well’ in AJC’s Translate Hate glossary. 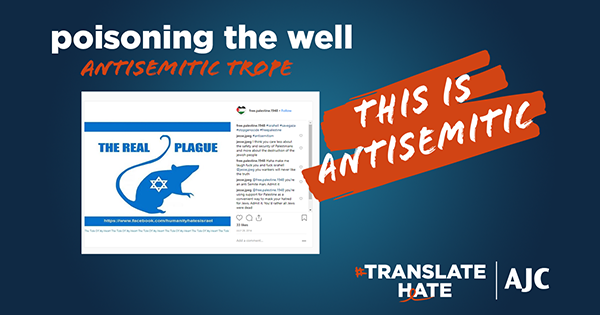 Other lies and conspiracies about Jews surfaced within segments of the Black Lives Matter (BLM) Movement, including the claim that Jews played a major role in the Atlantic Slave Trade. While some Jews with resources owned slaves, as did most wealthy people regardless of background, it was by no means widespread within the Jewish community. Condemned by the Council of the American Historical Association (AHA) as categorically false, this trope has been embraced by both white supremacist David Duke and Nation of Islam leader Louis Farrakhan.

Click here to read the entry for ‘slavery and slave trade’ in AJC’s Translate Hate glossary. 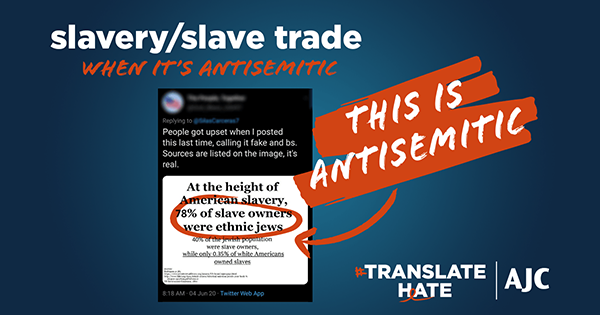 “Not the Real Jews”

But the white Jews who allegedly owned slaves were imposters – “not the real Jews,” say some antisemites. According to Farrakhan and Black Hebrew Israelites, Black people are the true chosen people of God – descendants of the twelve Hebrew tribes of Israel who settled across Africa after Israel’s destruction around 720 BCE. This creation myth, espoused by Black supremacists and promulgated during the Black Lives Matter protests, claims God’s chosen people were later sold into slavery—by white “fake” Jews.

Click here to read the entry for ‘not the real Jews’ in AJC’s Translate Hate glossary. 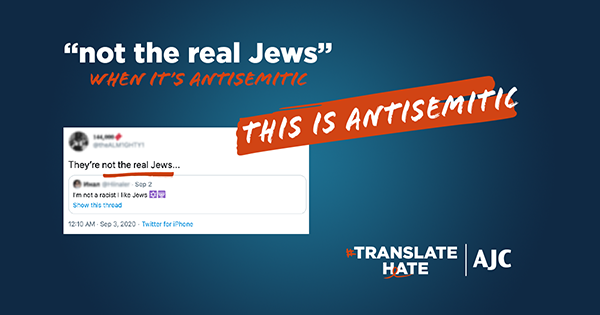 The “Deadly Exchange” trope suggests Jews have continued to contribute to the oppression of Black people through training programs between the U.S. and Israeli police forces. The trope draws a twisted analogy between American police brutality against Black Americans and the treatment of Palestinians by Israeli Defense Forces (IDF) as part of a geopolitical conflict thousands of miles away, seeking to blame Israel for domestic racial tensions that long predate the Jewish state’s creation. Not all of those who buy into this analogy intend it to be antisemitic. Many are genuinely concerned about social justice but are misinformed. This false equivalence appeared in demonstrations in the summer of 2020 when protesters chanted “Israel, we know you, you murder children, too.” 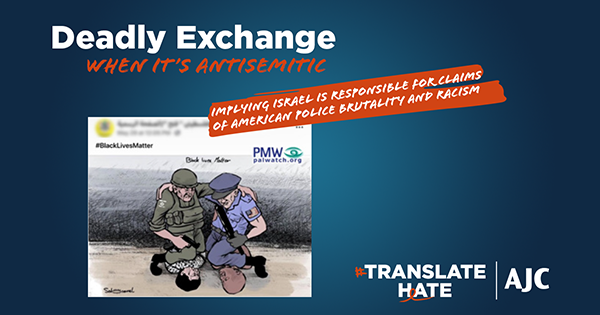 Fueling the anger and fears of so-called election fraud and the Capitol riots has been QAnon \'kyoo ən än \, a loosely organized, far-right network that the FBI has identified as a potential domestic terrorist threat.  “Q” refers to the top security clearance of the U.S. Department of Energy, while “Anon” references the anonymity of the supposed Q source who posts lies and antisemitic conspiracy theories about Jewish elites, globalists, and bankers to online messaging boards used by the far-right. QAnon conspiracy theorists are waiting for the “Storm”—the mass arrest of people in power, who comprise a satanic cabal of pedophiles and cannibals. The use of pedophiles in the conspiracy—the need to rescue children from the hands of the powerful globalists —harkens back to medieval blood libel accusations against Jews and antisemitic beliefs have been part of the conspiracy theory from its inception.

Click here to read the entry for ‘QAnon’ in AJC’s Translate Hate glossary. 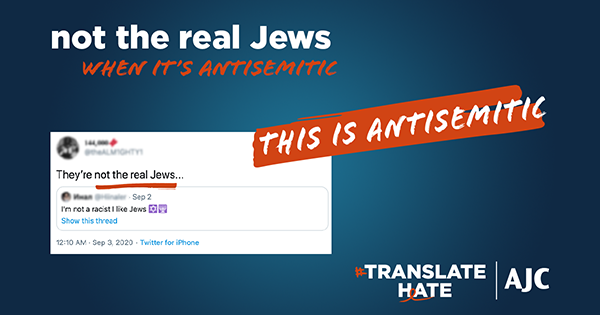 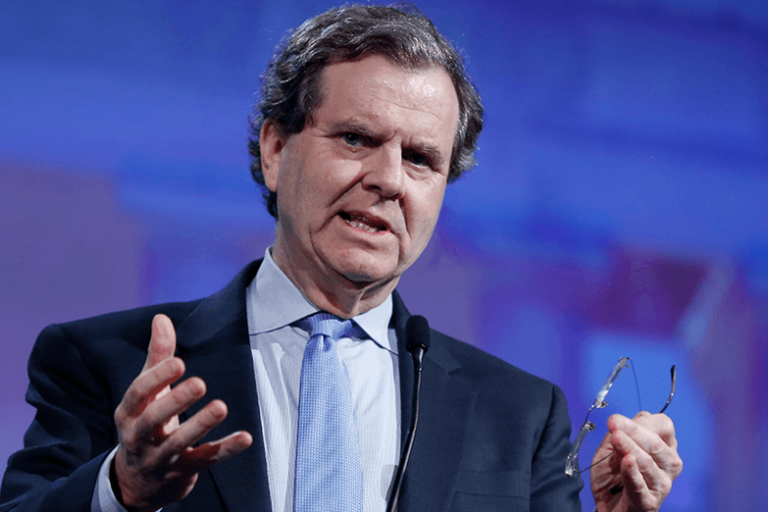 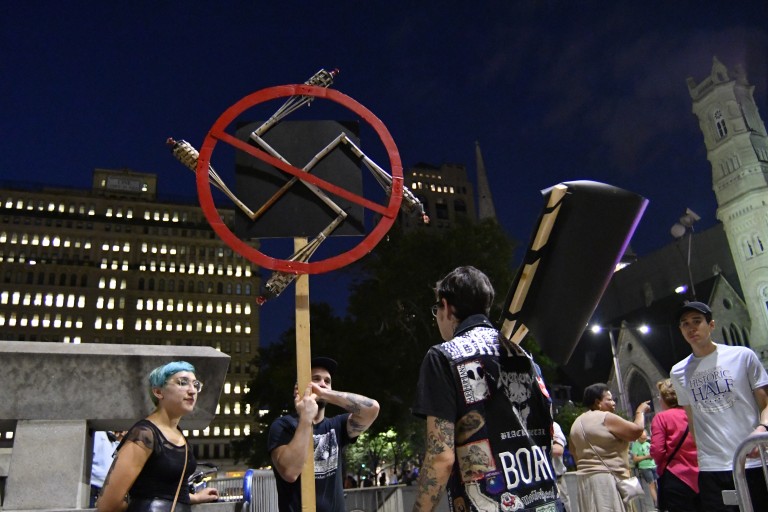