This week’s Torah portion opens with an important lesson about gratitude. Moses advises the Children of Israel that when they finally get into the Land of Israel, they must take the first fruits of their harvest and bring them to the Kohanim (priests) to be sacrificed. Then, they must tell the story of their enslavement in Egypt and of their redemption when God brought them out of Egypt to the Land of Israel, flowing with milk and honey. Then, our parsha continues, after three years in the Land, they are responsible for tithing their produce and giving away the tithed portion to the stranger, the widow, and the orphan in their midst. It is easy to imagine what the Children of Israel might have felt after finally getting to the Land of Israel: relief, as well as a desire to put a difficult past behind them and simply enjoy life. But, in its infinite wisdom, the Torah instructs a different path. From the moment of the very first harvest, when the Children of Israel might be tempted to pat themselves on the back and simply enjoy the bounty of the land, they are instructed to give up those first fruits to God. And, as if that were not enough, they are then instructed to tithe their harvest to help feed the vulnerable in their society. The message of the Torah is clear. Achieving a goal does not give us the right to simply triumph and rest on our laurels. Instead, it is incumbent upon us to remember how we got there, to express our gratitude to those who helped us, and to use our newfound wealth to help those in need. This week’s parsha reminds us that we are not solo actors in this world, but rather part of a greater whole. We didn’t achieve our dreams on our own, and we cannot keep the fruits of our achievements only for ourselves.

September 5, 1972 - Massacre of 11 Israeli athletes at the Munich Olympics

The 1972 Summer Olympics in Munich opened with great fanfare on August 26, 1972 with 7,173 athletes representing 121 countries in attendance. This was the first Olympics to be held in Germany since the 1936 Berlin Olympics, an infamous propaganda showcase for the Nazi regime. Now, a mere thirty-six years later, Germany was eager to show the world that it had transformed itself into a peaceful and happy place. At first, everything went well. Among other highlights, Mark Spitz, the Jewish swimmer on Team USA, won seven gold medals. And, in an uplifting show of resilience, Israel had sent a delegation of athletes, many of whom were children of Holocaust survivors, to compete in games located mere miles from the Dachau concentration camp.

But then, early in the morning on September 5, a horrifying situation began to unfold. Eight Palestinian terrorists, dressed in track suits to blend in with the athletes and carrying weapons and explosives concealed in gym bags, jumped the unguarded fence into the Olympic Village, and broke into the Israeli delegation’s living quarters. In the melee that ensued, the  terrorists murdered two Israeli athletes and took nine hostage. The terrorists, part of a cell called “Black September,” demanded that Israel release 234 Palestinian prisoners in exchange for the hostages. Israel, which has a policy of not negotiating with terrorists, refused to engage, instead offering Germany the incredible expertise of the Mossad, Israel’s intelligence agency, to combat the terrorists and rescue the athletes. But the Germans refused to listen to the Mossad and instead engaged in a bungled rescue operation. By the end of the day, the terrorists had murdered the remaining nine hostages and one German police officer. Five of the terrorists were also dead, shot by German police. The horrifying attack carried meaning beyond itself; once again, German soil was soaked with Jewish blood.

Unbelievably, the Olympic Committee only stopped the games for 24 hours due to the attack. And, to date, the Olympic Committee has yet to permit a memorial or a moment of silence in memory of the slain Israeli athletes because they feared “alienating” people. Jewish American Olympic gold medalist Aly Raisman raised awareness by paying public tribute to the Munich 11 at the 2012 Olympics in London. Eventually, in 2017, forty-five years after the massacre, a memorial to the eleven murdered athletes was finally put up in Munich’s Olympic Park.

Seventy-five years ago, Bess Myerson became the first, and until today, only Jewish Miss America. Myerson, the daughter of two Jewish immigrants from Eastern Europe, grew up in a Jewish cooperative housing project in the Bronx called the Shalom Aleichem Houses. While doing some modeling as a Hunter College student, she was discovered by a photographer who enrolled her without her knowledge in the Miss New York City beauty pageant in 1945. Although it took some convincing, she competed in the pageant, which was held on August 15, 1945 - coincidentally the day of Japan’s surrender to the Allies which ended World War II. To her surprise, she won. Myerson advanced to compete in the 1945 Miss America pageant as Miss New York. Although she was pressured to use the stage name “Beth Merrick” because it sounded less Jewish, she refused. She later said “It was the most important decision I ever made. It told me who I was, that I was first and foremost a Jew.” On September 8, 1945, Bess Myerson was crowned Miss America. American Jews were overjoyed with Myerson’s win. At a moment when the extent of the horror of what had happened to European Jewry in the Holocaust was coming to light, Myerson’s win was a statement that America was different than Europe, and the Jews were truly at home here.

Or were they? While of course America was very different from Europe, antisemitism was still alive and well. Usually, Miss America became the public face of the companies who had sponsored the Miss America pageant. When Myerson won the crown however, three out of five pageant sponsors declined to have her act as their representative. As she traveled around the country as Miss America, Myerson encountered more antisemitism. She saw signs that said “No Jews” in hotels, and noticed that she received far fewer speaking invitations than prior Miss Americas had. After a country club rescinded its invitation for her to speak because she was Jewish, Myerson had had enough. She began drifting away from pageant work and started giving lectures around the nation for the Anti-Defamation League about the evils of discrimination and prejudice. Myerson ultimately became a politician, civil servant, and author. She died in 2014 at the age of 90. After her death, Rabbi Jeffrey Salkin wrote for Religion News Service that in being crowned Miss America just as the Holocaust ended, "Bess Myerson represented the resurrection of the Jewish body—the journey from degradation to beauty."

If this was a normal year, baseball fans would be flocking to beloved ball parks this month, cheering for their teams as the tiniest bit of chill entered the late summer and early fall evening air. But, alas, due to the pandemic, this year’s baseball season is far from normal. To hearken back to better times, we thought we would bring you a taste of baseball’s place in America from close to seventy years ago!

In the early 1950s, AJC produced a series called Spots Before Your Eyes, which consisted of eight animated cartoons, each about one minute in length, advancing themes of tolerance, inclusion, and equality. The spots aired on television stations across America and were viewed as important and useful contributions to the American conversation. Indeed, in 1954, AJC won Variety’s annual award for the best use of television in the field of human relations. This week’s treasure from the AJC Archives is a cartoon from this series titled “Baseball.” It compares a baseball team whose teammates work together to win the game to American citizens of all different races and creeds who come together to build a successful society. A version of this cartoon was broadcast during the 1952 World Series! You can watch this sweet and uplifting cartoon here.

In celebration of the relationship between America’s Black and Jewish communities, and in opposition to antisemitism and racism, the National Urban League and American Jewish Committee are partnering to designate the week of September 6 Black-Jewish Unity Week. In this moment of growing widespread recognition of the systemic racism that continues to plague our nation, and also of rising antisemitism, our partnership has perhaps never been more important. But the story is not that simple. While the history of Black-Jewish relations in America is one of powerful partnership, it is also one of conflict and misunderstanding. Acknowledging both of those stories is critical to the continued strength of the partnership between our two communities. Discussing the relationship between Blacks and Jews in this country is one of the most important conversations we can have with our children and grandchildren at this moment in our nation’s history.

AJC and the National Urban League have collaborated to create a body of thoughtful and nuanced programming and resource material including podcasts, webinars, and suggestions of books and movies, to inform and enrich your understanding of the Black Jewish relationship. Visit the Black-Jewish Unity Week page on AJC’s website for links to all of these resources and much more. 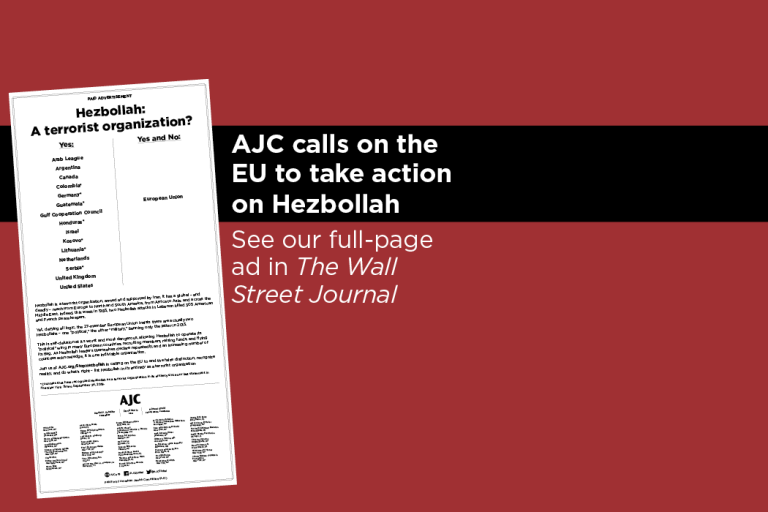