Thank you, Vice Chairman Torres for the introduction. Chairman Thompson, and distinguished members of the Committee, thank you for convening today’s hearing and for offering American Jewish Committee this opportunity to present brief remarks. I am Holly Huffnagle, AJC’s U.S. Director for Combating Antisemitism. It is an honor to be with you today, and with our esteemed witnesses.

We are gathered here in New Jersey and virtually because we are facing a growing threat of antisemitism and extremism. In the past year alone, in New Jersey, the Katz JCC reported a bomb threat in Cherry Hill, NJ in March; in April, a Nazi swastika was graffitied outside of a cemetery in Haddonfield, eggs were thrown and Jewish students were harassed following a pro-Palestine rally at Rutgers University, and an Orthodox Jewish man was stabbed by a man making antisemitic remarks; in July, a Nazi swastika and "Kill Jews" graffiti were discovered on a Lakewood walking path; the far-right, white supremacist Goyim Defense League distributed antisemitic flyers in Lindenwold and Brigantine in August; and, just a few days ago, in September, eggs were again thrown at the Jewish fraternity at Rutgers University during Jewish New Year. There has been a 25% increase in antisemitic incidents in the state in 2021, and it is on track to increase again in 2022. New Jersey is not alone. Unfortunately, we are witnessing rising antisemitism across the United States.

Before the Committee today, we must look at a few key questions. The first is what is happening right now? The second is why. Why is this happening--in this moment?  And third and finally, what does rising antisemitism mean for the future of the United States and what can be done? While American Jewish communities continue to thrive in the United States—and thank goodness they do not face levels of persecution here compared to other parts of the world—we must turn the tide back on rising antisemitism to protect not only American Jews, but our democracy as well.

First, what is happening? Antisemitism is rising in the United States. It is becoming more violent, and more open. According to the FBI, crimes targeting Jews comprised 55%--the majority—of all religious bias crimes, although Jews are only 2% of the population of the U.S.[1]  In the past year, 41% of Americans have seen antisemitism—and many more than once. And American Jews are experiencing antisemitism. In fact, one in four (24%) American Jews have personally been targeted by antisemitism this past year. American Jews are also changing their behavior out of fear of antisemitism. They are avoiding certain places, avoiding wearing things that might identify them as Jewish (such as a kippa or a Star of David necklace), or avoiding posting content online that might reveal their Jewish identity. That last piece jumps significantly for young American Jews (ages 18-29).[2] Today, antisemitism is more visible, easier to access, easier to share and spread than ever before.

Second, why? Why is antisemitism rising? And why now in 2022?  No reason justifies antisemitism, but there are several factors happening concurrently contributing to the current rise.

Conspiracy is the belief that there is someone or something in power who is exploiting humanity or controlling world events. To the antisemite, Jews are this “someone” in power; for example, the statements “Jews control the banks” and “Jews control the government” were phrases spoken by the perpetrator in Colleyville. That is why he chose a synagogue—the one closest to the location where Aafia Siddiqui[3] was held—for the site of this attack. But the FBI originally erroneously said the incident was “not related to the Jewish community.” The record was corrected, but numerous news outlets continued to run the original line.

With this example, but also many others, the conspiratorial nature of antisemitism makes it different from other forms of racism which vilify their victims as inferior. (Of course, Jews have also been historically vilified as inferior.) But antisemitism is unique because it also perceives its target—Jews—as being “superior”—as having too much privilege, too much power, and attacks them for that. There is a large blind spot in today’s society when it comes to antisemitism because here we have a minority who is assailed because of their perceived power. Therefore, we cannot just see antisemitism as a hatred or a religious bias--it is not just about criticizing Judaism or Jews as a religion; Jews are primarily attacked today for who they are (no longer for what they believe), for their perceived power and influence, or for the Jewish state, Israel.

This brings us to the crux of the issue. What does rising antisemitism mean for the future of America? And what can be done?

Because antisemitism at its core is envy, resentment, distrust, and conspiracy, when we see rising antisemitism, we also witness the weakening of democratic, pluralistic society.[4] And because we know when societies cannot stop rising antisemitism—by ignoring it, minimizing it, or even redefining it—they often fail to protect their democracy as well, it is urgent to generate a society-wide effort—led by our government leaders—to address the problem head-on.

Earlier this month, AJC published a Call to Action Against Antisemitism in America to mobilize and unite American leadership in all sectors of society to understand, respond to, and prevent antisemitism, and I want to pull today from the preventative measures—How can we go beyond simply responding to antisemitism, but actively work to prevent it? I am going to list ten data-backed measures; I will be skipping the details of each measure, for the interest of time, but have provided a full account in writing for the record.

To conclude, it is much more challenging to discuss prevention, and to discuss what is actually working. We know better data—shining a flashlight on the issue, has worked; we know trainings on antisemitism within DEI spaces have worked as we see policies changed and corrected; we know pushing on the social media companies has worked—we still have a long way to go, but we are much farther than we were five to seven years ago; we know that coalition building has worked, especially since behavioral science has demonstrated people change when information comes from someone they trust, someone like them—which might not be the Jewish community so non-Jewish allies are paramount here; and we know being proudly Jewish—fostering Jewish pride and Jewish life—works. When these interventions are used properly, used together, and used continuously, we notice a difference and we see glimpses of success—even if partial—which is why having the House Homeland Security Committee take on and champion these preventative measures is so critical—in New Jersey, and across the United States.

I want to thank you for your time and your commitment. Despite the threats of antisemitism, Jews across the country and around the world are proudly displaying their Jewish identities. The Jewish community has incredible allies, from local houses of worship and community leaders to elected officials at all levels, such as the Members of Congress here today. And those leaders are speaking out, in defense of their Jewish friends and for the sake of our democratic values. We are very grateful to the House Committee on Homeland Security for bringing attention to this pressing and pervasive issue, and for the participation of Committee members both virtually and in-person in New Jersey.

[2] These statistics are from American Jewish Committee’s most recent State of Antisemitism in America report (2021).

[3] A Pakistani national who is serving an 86-year sentence at the Federal Medical Center, Carswell in Fort Worth, Texas, United States for attempted murder and other felonies.

[4] Because antisemitism is an ancient hatred—traced back two thousand years, it’s familiar— there is unfortunately a large repertoire of accusations and tropes to choose from to blame someone—often Jews (or coded words for Jews)—for these crises. But antisemitism is not only an attack on Jews; it is really an assault on the core values of America.

[5] Members of Congress can share AJC’s Translate Hate glossary on their websites as a resource for constituents. AJC’s Recognizing when Anti-Israel Actions Become Antisemitic is designed to help elected officials navigate and address Israel-related antisemitism.

[6] To date, 28 states along with the District of Columbia have endorsed the IHRA Working Definition of Antisemitism. New Jersey has yet to take this important step.

[7] When an antisemitic incident occurs, members of Congress should check in with their local Jewish communities. A standing Jewish community or interfaith advisory board can help ensure regular communication.

[8] The Jewish people include Ashkenazi Jews descended from Eastern Europe, Black Jews from Ethiopia, Brown Jews from India, and Mizrahi and Sephardi Jews from North Africa, the Middle East, Turkey, and Iran.

[9] This will include asking if Jewish employees have avoided expressing views on Israel out of fear of reprisal or animosity.

[10] In 2021, four in ten U.S. adults witnessed antisemitism, including negative remarks or online content about Jewish people. It is crucial to report these occurrences to authority figures, law enforcement or, if online, to the social media platform. Everyone should be encouraged to report anti-Jewish incidents.

[12] For example, the language of “Jews will not replace us” chanted by white nationalist marchers at the Unite the Right Rally in Charlottesville, in August 2017, was the same “great replacement” conspiracy theory that led to the murders of African American shoppers in Buffalo, NY in May 2022. In response to what happened in Buffalo, Black activist Eric Ward, said it best: “It is important for us to understand that African Americans were killed because they were Black, but the motivating story that drove the killer was an idea that he was at war with the Jewish community.”

[13] This is especially vital now, given the divisions in our country. A recent large Pew survey, for instance, revealed that “growing numbers of Americans see people in the opposite political party as close-minded, dishonest, unintelligent and even immoral.” In addition, there has been a massive breakdown of public (and private) trust; not only are we not speaking as much to those who are or who think differently than us, studies show we are less trusting—of others and our institutions. Congress must rebuild this trust with the public and with each other.

[14] With more than 150 Representatives, and more than half the Senate, the House and Senate Bipartisan Taskforces are a useful example of reflecting political will to address the problem, which should lead to increased legislative measures. 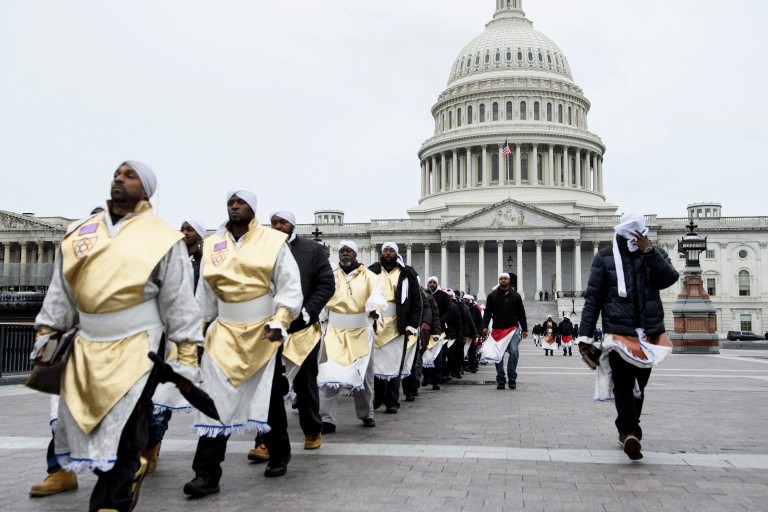