In the Face of Tragedy, the Jewish Community of Puerto Rico Makes a Difference

It's been over a month since Hurricane Maria wreaked havoc on Puerto Rico, but the hardships facing the residents are far from over. Today, 85 percent of the island remains without electricity, telecommunications are cut, basic goods are scarce, and the economy is plummeting. Amid the devastation, the Jewish community has emerged as a bastion of support. With a little more than 1,500 members in a general population of 3.4 million, this small but active community has mobilized its own resources and those of Jewish organizations in the United States to help their neighbors in need.

"There wasn’t a corner here that hasn’t been hit," emphasizes Diego Mendelbaum, community and religious director of the Jewish Community Center of Puerto Rico, in a telephone conversation from San Juan. "And we must add that there are no available routes to bring help by land. Everything has to come by air or sea." While his community center suffered damage to the roof, Mendelbaum assures me that it is "nothing we can’t repair." From the center, with the assistance of the community, trucks leave almost daily to the most affected areas. 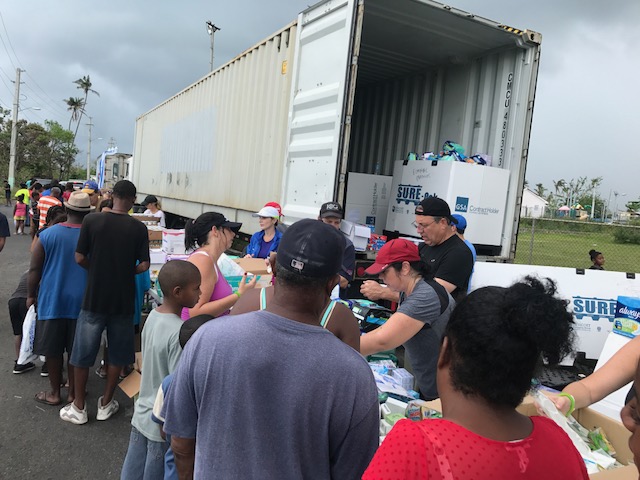 AJC: How is the situation after the hurricane?

DM: This hurricane had a huge destructive power. However it’s what came afterwards—and not received much coverage—that is causing problems. The infrastructure collapsed: many shops and offices remain closed, with lots of people unemployed, triggering massive emigration. Since the hurricane, an estimated 60,000 Puerto Ricans have arrived in central Florida, mainly Orlando and the surrounding areas.

AJC: How did the Jewish community of Puerto Rico react to the disaster?

DM: We are cooperating as best we can. We are very active, especially in Loiza, a municipality of predominantly low-income people who were in need even before hurricanes Maria and Irma struck. Most of the houses there, made of wood and zinc, were left without roofs. In addition, large numbers of people have lost their jobs. Everybody, regardless of economic situation, has been affected by the disappearance of sources of income.

AJC: What kind of assistance do you provide?

DM: We have created a fund to provide help. And through our volunteers, we’re distributing supplies of urgently needed items, from food, flashlights, and insect repellent to hygiene products, batteries, disinfectants, first aid, and medicines. The supplies that we distribute come from two sources, some brought in on charter flights and others that we buy locally. At the same time, we are providing resources for the repair of some specific places. In the next stage, we will wrap up distribution and focus on the repair of homes. The plan includes the purchase of materials and the employment of members of the affected communities in the reconstruction efforts.

AJC: Many Jewish organizations in the United States, including the American Jewish Committee, have contributed to the relief efforts in Puerto Rico. How are you mobilizing this help?

DM: Truly, civil society has responded in a way that is moving. The members of our own diaspora in Miami and New York, and the children of this community living in the United States quickly organized or collected money to pay for flights that bring all kinds of products to the island. Jewish organizations and individuals have been very generous with donations, and sending generators and supplies.

AJC: How do you see the response of the federal government?

DM: This is "the political question"—responding to it forces you to take a stand. I will give a personal answer, not necessarily reflecting my institutional affiliation. I see a federal presence in Puerto Rico. Military flights come and go one after the other. There are helicopters everywhere. The same goes for the military personnel in the city and the trucks on the highway. That is to say, there’s definitely movement in Puerto Rico. However, I do not have the expertise to determine whether the governmental presence is sufficient or adequate.

AJC: What is your message to the Jewish communities in the United States and the world?

DM: I want to take advantage of this channel that AJC provides, which I know is respected and widely broadcast, to say thanks to the Jewish communities in the United States because the response was quick and complete. We have a longstanding collaboration with AJC. In 2010, AJC, together with the National Puerto Rican Coalition and the Hispanic Federation, brought a delegation of important Jewish and Puerto Rican leaders from the continent to the island. As partners on the island, we secured meetings with the governor and other high-ranking officials. This was important because the relationships we established continue to this day.

I also want to express special thanks to our diaspora, which has acted in an exemplary way, given the circumstances. Today, the Jewish community of Puerto Rico is going through a difficult time. But I am hopeful about the future because as economic conditions improve, the community will continue to function.

Puerto Rico is part of the American nation and must not be forgotten. Here live three-and-a-half million Americans who are entitled to equal protection under the American Constitution. There has to be special help and consideration for this island to enable it to move forward.